By Michelle on 8th October 2010 in words 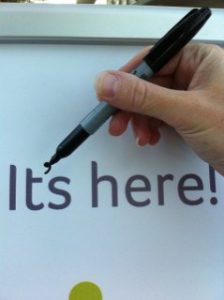 Yesterday, as I was getting ready for work, I heard a news story about a business bemoaning the poor grammar skills of their recent graduates. It seems bosses at Leeds Building Society are so concerned about workers’ written English that they have hired a teacher to give them grammar lessons.

As I arrived at the office I spotted a prominent poster with an  error that would no doubt have irritated one of their senior executives. The poster exclaimed ‘Its here’. The standard form of punctuation in this context is:  ‘It’s here’ – with it’s being a shortened form of it is.

Does grammar, spelling  and punctuation matter?

In the case of the poster, the message can be understood, so you could argue that it’s irrelevant. But as in the argument about the building society employees, does an inattention to detail here mean sloppiness elsewhere?

As a writer I have a foot on both sides of the fence. As someone who works with words every day and who has a good understanding of the conventions of spelling, grammar and punctuation, something inside me screams out, “But it’s wrong”.

I’m aware that people can get very passionate about what’s ‘wrong’ and ‘right’ when it comes to grammar. But as a writer, I’m also aware that language changes. It evolves. Words, sentence structure and punctuation that were perfectly acceptable to a writer like Charles Dickens,  would seem rather formal and verbose if I were to use them today.

We often talk about the ‘rules of grammar’ – but what are they? Where is the book that tells me what they are? The truth is, there isn’t one.

But discussions about grammar rules often lead to misconceptions, like “You can’t start a sentence with and or but”. Yes you can. And I often do. In fact I’ve done it in this paragraph.

I was lucky to have good teachers, plenty of encouragement at home and a certain amount of natural interest and aptitude for written English and I work with words every day, so I keep my skills fresh. That’s not true for everyone.

So is it fair to recruit a sales person, for example, to test them at interview on how they handle a telephone call and whether they’ll fit with your team and then criticise them when they write a customer email littered with grammatical mistakes?

Even if you were taught well, how much do you remember from your school days? If you asked me to add up a string of figures or work out a percentage, I’d be a bit stuck without a calculator. That’s partly because I prefer words to numbers, but mostly because I’m a lot out of practice.

So while it’s true that most of us use the English language every day, many of us don’t have to write it down. And just criticising someone for making a mistake, or thinking they’re stupid because they got something ‘wrong’ doesn’t help either.

If you can understand the message, does it matter? It does to me. But what about you?

2 Responses to A question of grammar

Why, sometimes I’ve believed as many as six impossible things before breakfast