By Michelle on 6th December 2017 in review 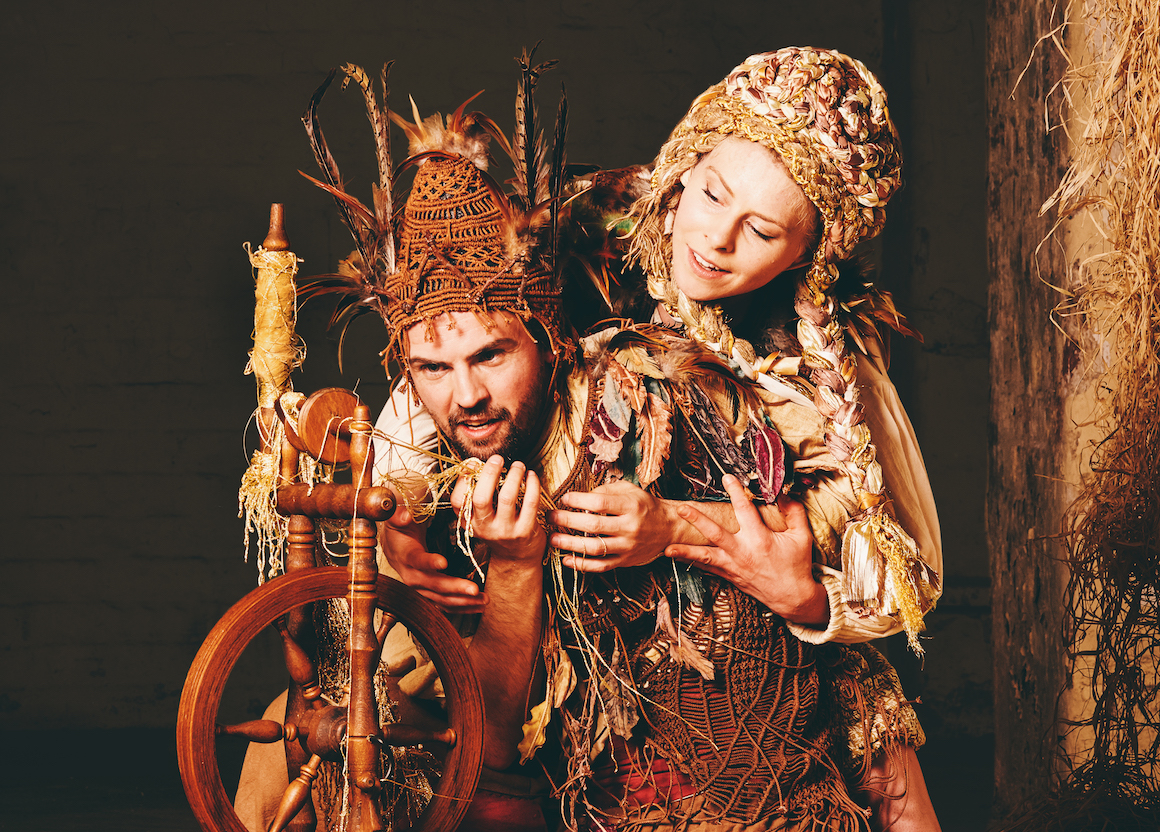 Rumplestiltskin is the third in the trilogy of fairy tales brought to life by the incredible creative talents of leading dance theatre company balletLORENT. The show, which premiered at Northern Stage, Newcastle earlier this year, was filmed live and will be released online in time for Christmas family viewing.

This modern adaptation of the Grimm’s fairy tale brings a cast of 24 professional dancers together on stage with local school children and older people from a Knit and Natter community group in Benwell.

Director and choreographer Liv Lorent says this kind of outreach is a vital part of balletLORENT’s unique approach: “We’ve been making work in the North East for over 20 years, and we know we’ll always find an amazing original cast here,” she explains. “We normally go to places that don’t have the most provision. We don’t seek out stage school kids. Most of them have never been on stage before. They’re not coming from privileged upbringings.”

The additional cast provide an earthy authenticity to this fantastic tale of a shepherd’s daughter who is imprisoned by the King when her father boasts she can spin straw into gold. She is helped in her task by a strange youth called Rumplestiltskin who demands her first-born child in return. 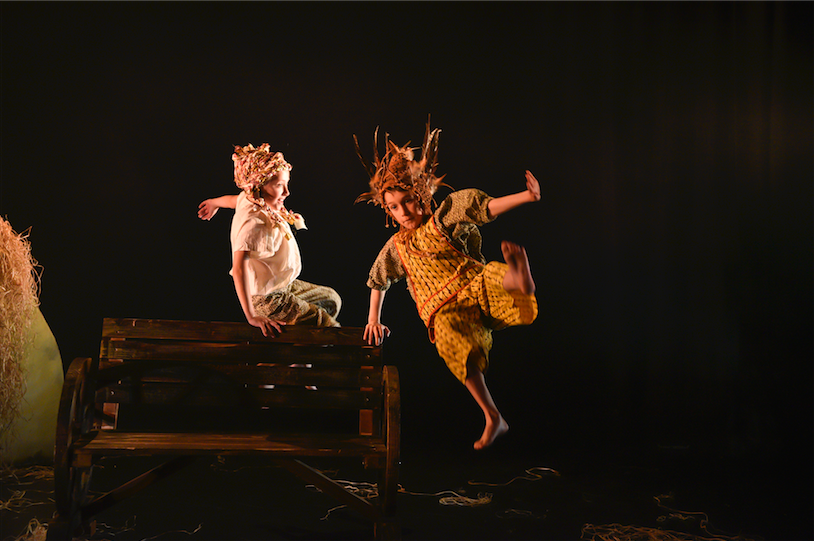 Help from the Poet Laureate and a Game of Thones star

The opening scenes are a rush of joy as children and adults dance through an idyllic pastoral landscape of rolling hills, unfurling the ribbons of a maypole, bouncing on trampolines and snuggling up to the flock of sheep who steal the show whenever they appear.

The story, re-imagined by Carol Ann Duffy and narrated by actor Ben Crompton (Game of Thrones) refocuses on Rumpelstiltskin, as a kind of anti-hero. We learn how this strange, unloved outcast is rejected by his grief-stricken father, the King and lives as a creature of the landscape.

“All of us are keen on celebrating the one who’s different, the anti-hero, not the popular one…finding the compassion and beauty in them,” comments Director Liv Lorent. “We’re all messy, faulted human beings.”

As the adult Rumpelstiltskin, dancer Gavin Coward, moved me to tears: “Rumplestiltskin is not your normal type of fairy tale hero… he’s complex and tricky,” he explains. “You have to use your own demons and parts of your own life to portray that. And when you hear the music and put on the costume, all the elements help bring that to life.” 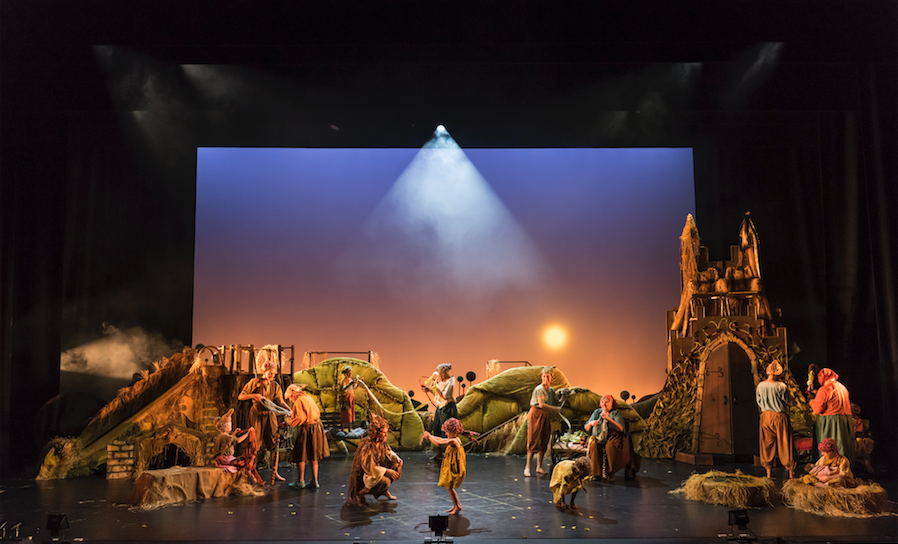 The backdrop to incredible dance and storytelling in Rumpelstiltskin

Adapting the themes of a classic fairy story

At times it’s a dark tale that touches on themes of abuse, neglect, control and greed. But while balletLorent’s production doesn’t shy away from these disturbing themes, it is ultimately a joyous and uplifting performance in which the redeeming power of love triumphs.

As narrator, actor Ben Compton worked closely with the production team throughout rehearsals, adapting and changing the language, and adding real warmth and engagement to Carol Ann Duffy’s script.

On being asked how it felt to tinker with words written by the award-winning writer and Poet Laureate he says: “Carol Ann brings this great text. It’s tight, but it’s all there. But sometimes when you’re rehearsing you hear something doesn’t quite fit, or realise you can see that, so you don’t need to say it as well. I see it as tent-poles really. We’re creating huge canvases of movement and sound and we need these tent-poles to help the audience understand where they are.”

Speaking to members of the cast and production team after the premiere of the film, at the Tyneside Cinema, the spirit of trust which comes through working together is obvious. It is a key strength of this production, with experts in choreography, music, costume, set and lighting design collaborating to create an intensely emotional experience. This organic approach to developing Rumpelstiltskin adds to the drama and authenticity of the storytelling on many different levels.

Talking to Murray Gold (Doctor Who), whose stunning score intensifies the emotions of love and grief, joy and pain portrayed on stage, I am surprised to learn how little is actually fixed in place before the opening night.

He starts composing after seeing the show in early development and then is present at rehearsals in the final two or three weeks. And he reveals that one of the challenges in recording the final version of the narration in a mobile studio in Newcastle was getting Ben Compton to complete a take before Murray’s young daughter piped up.

On the inspiration for the score, Murray says: “I wanted the music to reflect a pagan, peasant ideal that goes with the look and feel of the design.” On watching the finished production he gets just as caught up in it as any member of the audience saying, “I burst into tears in the first 10 minutes of watching it at Northern Stage. It has this rush of emotion that comes from seeing the joy on the stage.” 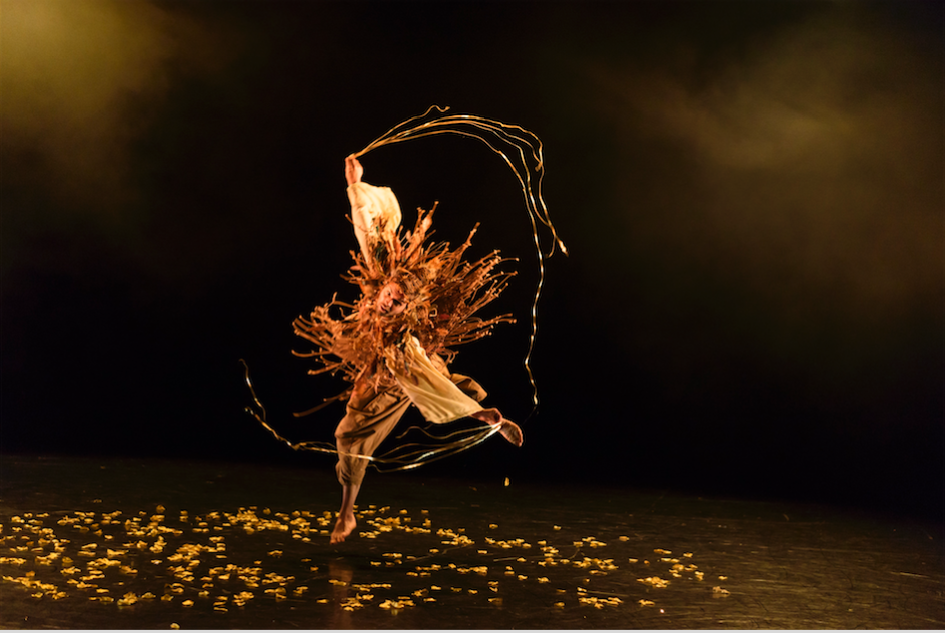 Rumplestiltskin showcases balletLorent’s unique mix of dance styles. Rougher, edgier and more organic than most contemporary dance, it brings in elements of acrobatics, with dancers working with hoops and poles, and displaying superb balance and bravery as they climb and dance high among the scenery. John Kendall, as the King, spinning upside down in a noose of his own gold is a particularly breath-taking moment among many.

The costumes designed by Michelle Clapton, best known for her Emmy winning designs for Game of Thrones, have to withstand the considerable rigours of being thrown and tumbled around the stage as well as helping the cast portray their characters.

Principal dancer, Natalie Trewinnard, who plays the shepherd’s daughter, explains how the costume helped her to define how her character moves at different points in the performance. “I tried to rehearse in the wig I wear as much as I could, because it really changed the way I move and hold my head. It weighs 1kg with the bulk of the plaits. And when I put the collar of gold on, the restrictiveness of that really feeds the character at that point.”

Your chance to see Rumpelstiltskin

Maintaining the theme of opening the world of dance to people who may not normally get the chance to experience it, Rumpelstiltskin will be released as an online film on Friday 8th December. The stage version will tour venues across the UK throughout Spring and Autumn 2018.

The first of balletLORENT’s fairytale trilogy, Rapunzel, which I saw in 2012, left a lasting impression on me that’s now shared with the latest production of Rumpelstiltskin. My mind has been a whirl of dancers, glittering golden tears and soaring emotions ever since.

Stunning, sumptuous and sensational, it’s a performance with tremendous energy, vision and soul. Watch it online or catch it live on tour next year and you’re in for an excellent treat.

Find more information about the tour and online film at www.balletlorent.com.