I was excited and honoured to be a Writer in Residence for a day at this year’s Bloomsbury Festival in London. This annual celebration of arts, science, literature and creativity invited ten writers from 26 Characters to enjoy a varied collection of exhibitions and performances and to create a piece of writing in response.

The festival itself takes place in various locations around the Bloomsbury area – part of London that has a long association with writers, thinkers and scientists. It’s not an area that I know well, so I enjoyed the chance to walk the streets, spotting blue plaques on buildings commemorating famous people who had lived there in the past and stumbling across its green squares and community spaces.

The theme of this year’s festival is small steps and giant leaps, inspired by the 50th anniversary of the first Moon landing, and the moon featured large in my inspiration and imagination on the day.

I was happy to wander and explore and leave things to chance, but also wanted to make sure that I saw something of the festival programme, so checked the programme and booked in for a couple of events.

The first was Bodies in Space, a contemporary dance performance at Goodenough College, with choreography from Helen Cox and sound design by Dougie Brown.

The piece involved three dancers moving to an abstract composition created by turning recordings of light waves from NASA’s Kepler space telescope into sounds. The dancers moved in changing orbits around each other, sometimes connecting, at other times moving as if pushed and pulled by invisible sources.

I marvelled at how the dancers remembered the choreography and responded to one another, and how they kept time and rhythm in a space created by abstract beeps and buzzes.

I love contemporary dance. To me it’s like poetry without words. When it’s done well, the movements tell a story and conjure emotions. And like poetry, the interpretation, the meaning, exists in the space between the performers and the audience. This performance and the short discussion afterwards gave me a real starting point inspiration for my final piece. 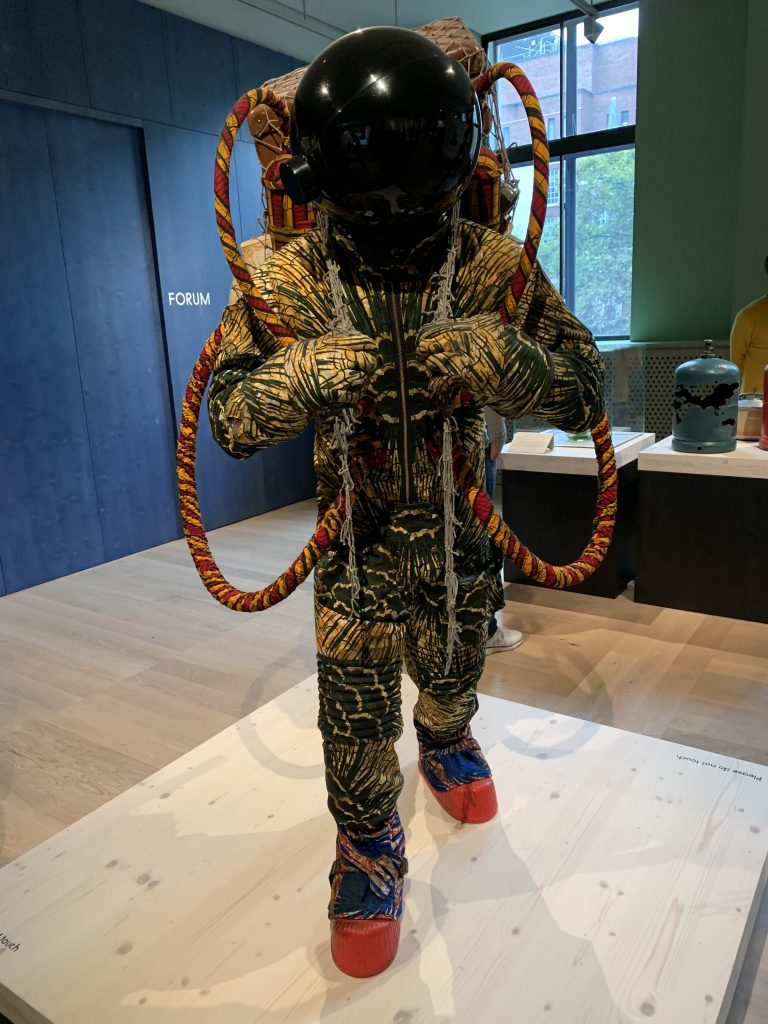 Refugee Astronaut III by Yinka Shonibare at the Wellcome Collection

From there I went to visit the Wellcome Collection and its exhibition Being Human. There’s a mixture of science and art among varied exhibits that invite questions about medical knowledge, climate emergency and our changing relationships with our planet and beyond.

There were some really striking and simple ideas on show, such as the friendship bench which has helped reduce suicides and mental health in Zimbabwe. And how adding a photograph to a hazmat suit helped bring a human face to ebola care.

But the most striking piece for me, and the one that made it into that day’s writing was Refugee Astronaut III by artist Yinka Shonibare. This lone figure in a spacesuit and helmet carries a pack of possessions on their back including books, photographs, a lantern and a teapot.

From the colourful spacesuit, which reminded me of a costume worn by David Bowie in his starman phase to the pack of goods it carried on its back, this artwork invited many questions about where this figure was going, what were they leaving, how had they chosen what to take with them.

The Wellcome collection also provided a quiet space in its beautiful library, a respite from the drizzly rain where I started to assemble my thoughts and ideas in my notebook.

The last event of the day was an evening walk with writer and author Rob Self Pierson. He’s written a book called Moonwalking about a year of adventures walking on the night of the full moon.

Rob had previously kindly asked me to contribute a blog post about business purpose for his copywriting and tone of voice business The Table and I was fortunate enough to meet him on a Dark Angels creative writing for business course in France earlier this year, when he read the first chapter of his latest book.

Together with a small group we spent a magical couple of hours walking the streets, searching for the moon between the buildings and trees and hearing Rob read extracts from Moonwalking. From meeting paranormal investigators to gardening by moonlight, he gave us a insight into some of the characters and adventures he encountered in his own discoveries.

I had to scurry away to catch the last train north, and although it was late, my head was full of ideas, images and thoughts which I assembled into my Writer in Residence piece which you can read on the Bloomsbury Festival website.

In my daily work as a copywriter, much of what I write is business as usual and although I always try to bring a creative sensitivity to the words and phrases I offer, I don’t often have the freedom to really stretch myself in my writing. Membership of 26 Characters gives me the opportunity to work on creative projects, and the confidence to project my own thoughts, feelings and experiences in work that I hope will connect with others. It was a real treat to be invited to spend the day at the Bloomsbury Festival and enjoy the freedom to explore randomly, be inspired by art, science and the environment to create my first piece as a Writer in Residence.