By Michelle on in 26, words, writing

Wordstock, the annual gathering of members of 26 is a place where words bubble up into a rich and fragrant stew; where the tick of time inspires the tock of activity. Where we celebrate creativity, learn, laugh and fire up new writing projects for the next 12 months.

I arrived a little late at the Free Word Centre in Farringdon, so missed the opening celebrations of projects that 26 writers have taken part in during 2015, including 26 Pairs of Eyes, 26 Under a Northern Sky and 26 Children’s Winters. 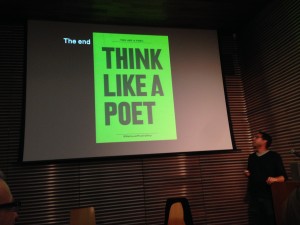 But I was there for the launch of the latest, which I’m also involved in. Over the next 26 weeks, 26 postcodes will reveal a sestude inspired by a postcode together with the story behind it. Gillian Colhoun kicked things off by reading her piece, based on the Gaelic football ground where Seamus Heaney played. My own contribution, based on Dove Cottage, the Lake District home of William and Dorothy Wordworth, will appear next year.

The day was split into a series of sessions, with a choice of workshops in the morning and afternoon. I first opted for Rishi Dastidar‘s session. As head of verbal identity at BrandPie and a published poet, he’s a mash up of Don Draper and Byron and showed us four ways to use poetry techniques in copywriting.

A packed session, full of useful content and some speedy writing. And I’ve already used one of the techniques to inspire a new brand name. Who says you can’t measure the value of inspiration?

Next up, more poetry from spoken word artist and Barnes’ answer to Eminem Charlie Du Pre. He serenaded us on ukulele, and left us wondering why we’ve never heard rhymes like:  ‘I engage with lots of faces pretty much on a daily basis’, before. Fast-paced, funny and rapping genius.

I spent the afternoon session with independent copywriter, author and trainer, Roger Horberry who loves alliteration even more than I do. He demonstrated that the forms of rhetoric pack a punch in modern marketing. And, for this writer at least, brought back memories of studying Spenser, Donne and Pope at university.

Celebrating the best in writing at 26

Self-styled biblio-fundamentalist Andy Miller was next, sharing his experience of actually reading the books that he always wanted to and some he even pretended he had. He finished by ‘persuading’ a handful of 26ers to commit to reading their own choice of books. For my part, I’ve signed up to read John Buchan’s 39 Steps, spurred on by another conversation I had during the day.

The final session was a fascinating insight into storytelling from John Yorke, former Eastenders script editor and head of drama at BBC and Channel 4. I love a good bit of story-theory and this so much fired up my interest that I’ve been looking for the mid points and reversals of fortune in every TV drama I’ve watched since.

I learned something new too. Did you know that the acts in Shakespeare plays were determined by the length of time it took to burn a candle?

Last time I came to Wordstock, I was introduced to the music of Nick Drake and on the journey home, sparked the idea that became 26 Under A Northern Sky along with co-conspirator Sandy Wilkie. This time we collaborated again and have put forward another idea that we both hope will be adopted as another creative brief.

I really couldn’t have asked more from a packed day of words, writers and mind-blowing creativity. The train journey north wasn’t nearly enough time to process it all. And the pile of books on my reading list has grown by at least 3 volumes. If you can make it next year, I heartily recommend it.