By Michelle on in 26

I’ve been reading a fair bit of Charles Dickens recently, and was reminded by this post of his habit of talking great long walks at night in the London streets. 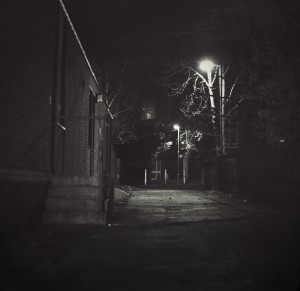 You can hear those endless trampings in his novels. His knowledge of the city emerges in descriptions of streets filled with cobbles and alleyways, stairwells and courtyards; from the labyrinth of Coketown in Hard Times to the business of lodgings, stationers, writers’ garrets and legal chambers around the Chancery court in Bleak House.

“Doors were slamming violently, lamps were flickering or blown out, signs were rocking in their frames, the water of the kennels, wind-dispersed, flew about in drops like rain.” Dickens conjures up a grim night to be out in Our Mutual Friend.

Walking in the landscape is something we might more readily associate with the Romantic poets, or nature writers. Yet Dickens’ urban landscape is just as important as Wordsworth’s Lake District or the Bronte’s Yorkshire Moors.

For me, there’s something in that act of walking, a repeated action requiring little conscious thought that lends itself to writing, or at least thinking about writing.

In wandering, literally and mentally, the mind finds a freedom from everyday cares, and the subconscious surfaces. I’ve often found that a walk, or a run, will give me a new direction when I come back to a piece of writing, without me deliberately seeking it.

So I’m excited to be starting a new writing project that sets walking in the landscape at its heart. This spring, 26 writers will take a walk in the UK, going from a place name beginning with each letter of the alphabet to another place starting with the next letter in sequence (e.g. Boarhills to Crail).

We’ll be taking photographs, drawing maps and writing a sestude – 62 words exactly, inspired by our wanderings.

The walks cover parts of Scotland, Northern Ireland, Wales and reach from Somerset and Cornwall in England to my beloved North East coast in Northumberland. They will take in a range of landscapes; rivers, woods, farmland, coastal fringes, urban areas and mountains.

Watch out for more news of #The26Steps this spring.