By Michelle on in 26

LA22 9SH is  the postcode for Dove Cottage in Grasmere where Wordsworth and his family lived from 1799 to 1808 and the inspiration for my latest creative piece now published online. 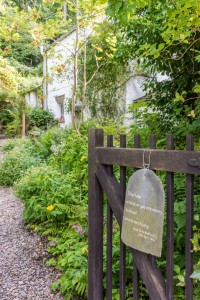 Last year I was selected as one of 26 writers to take part in a creative collaboration based on postcodes.This coded shorthand of letters and numbers identified a place which we were to use as inspiration to write a sestude – 62 words exactly.

This week, which marks the anniversary of Wordsworth’s birth, my sestude appears online as part of the 26 postcodes collection, together with it’s back story. You can read them on the 26 postcodes site.

I felt I got lucky with my postcode, with its obvious literary connections and its scenic beauty. But at the same time, I felt the pressure of trying to write something that would measure against one of England’s best known poets.

Despite having studied English literature, Wordsworth wasn’t really a writer who I had studied or was familiar with much beyond his most quoted poem, ‘I wandered lonely as a cloud‘.

So I read more of his poems, did some research into his biography and discovered a writer far more challenging and interesting than the chocolate-box image of a Lakes poet would imply.

The exhibition in the museum at Dove Cottage also filled in many biographical and personal details. And shows how much Wordsworth relied on his sister Dorothy to record and recall the scenes of every day life that inspired his writing. In a page of her Grasmere journal on display, she writes of the daffodils brought to life in that oft-quoted poem.

It’s been so long since I wrote my sestude about Wordsworth and Dove Cottage that I enjoyed coming back to it, reading it afresh, almost as though it was written by someone else. I can trace every line back to an object, thought or sensation experienced in that place. It’s a location that continues to inspire.