By Michelle on in books, reading, Uncategorised

“A book is a world full of words where you live for a while.” Patrick Ness, More Than This

I was talking to someone recently about my time at university and half-jokingly remarked that during my 3 years studying, I only lived part time in the 20th Century. 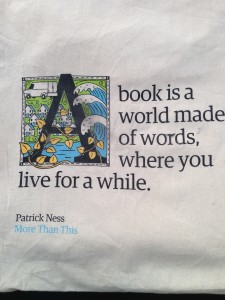 I discovered a love of medieval literature and stories even older than that from Beowulf to the Pearl poet. My favourite lectures, tutorials and studies were based on old works – Chaucer, Spenser, Sidney, Milton.

These days I’m more contemporary in my reading but I still love that feeling of walking another landscape, sampling another culture or stepping into another experience that I get through reading both fact and fiction.

Last week’s charity challenge of walking 10,000 steps per day gave me some appreciation of the time and effort it takes women and girls in the developing world to fetch water for their families. But arguably books and stories take me even further.

I’ve been to Botswana with Alexander McCall Smith and Mma Ramotswe; eaten in the best places in San Francisco with Amy Tan and even been into space with Commander Chris Hadfield.

I’ve time travelled to Victorian London with Dickens and to Regency period Bath with Jane Austen. I’ve walked the streets of Ankh Morpork; survived a shipwreck on an alien planet where men can hear each others thoughts, and travelled beyond Wall into Faerie (and made it back again). Books take me places I could never go.

I will never know what it means to be a black woman transplanted from Nigeria to the USA; to have my hair chemically relaxed, or tightly braided in a salon. I’ll never experience racism in all its different shades and colours. But, thanks to the book I’m currently reading, ‘Americanah’ by Chimananda Ngozi Adiche, I know about these experiences. And through reading I’ve seen the world through another person’s eyes.

I am grateful to books for all the worlds they allow me to live in for a while.

By Michelle on in books, reading

One of the sessions I attended at Wordstock last week was to hear Andy Miller speak about his year of reading dangerously. Picking up and actually finishing books he’d once claimed to read but hadn’t. Books that people consider difficult to read. Books like Moby Dick and Anna Karenina.

There was lots that struck me in his empassioned presentation, but one that chimed true is what he said about the books we have read recently. How they are limited, and for a large part, chosen for us.

If you still have a bookshop, the fiction section is largely dominated by the top ten hardback or paperback titles, pushed forward by the major publishing companies. Unless it’s a very large, independent or particularly quirky place, there’s little space for anything outside the popular in all genres and the well known classics. And so, those of us who read, get a narrowing choice of the new, and we all pick up “We need to talk about Kevin” or “Wolf Hall’.

Ah, and there’s the other thing that Andy spoke about. If you start a book, you should finish it. And I haven’t finished Wolf Hall. It isn’t very often that I fail to finish a book, but Wolf Hall I put aside after giving it a really good try, with that standard excuse of “Life’s too short to read something I’m not enjoying.”

And yet where would I be if I hadn’t persisted with difficult books? As a student, I toughed it out through the Faerie Queene, various medieval texts and far more impenetrable stuff. I stuck with Dickens Our Mutual Friend, which, quite frankly, really takes some time to get going, but does pay off.

The Japanese have a word for a pile of books waiting to be read – it’s Tsundoku.  I’ve managed to keep mine manageable this year, by virtue of not acquiring new books, until I’ve read the ones I already have. I currently have four in waiting, including two non-fiction titles, but I’m prepared to put them to one side a little longer to take up a challenge to read outside my usual range. To finish books I’ve started, to read some older stuff I may have missed.

I am starting with John Buchan’s 39 Steps, which I don’t expect to be a difficult read, but I prepared to be challenged. This is a rich time for my reading list, with a birthday and Christmas approaching. So I’m asking you to recommend some titles and until the end of January, I’ll read a little more dangerously.