By Michelle on in books, travel

I always delight in a new book. And although I have embraced the electronic version as an excellent way of carrying a library around with me, there’s nothing quite like the feel of book made of paper.

Today’s is a particular delight, being an extravagant hardback. A hefty tome that sits, spine along the palm of my hand as its glossy pages open, peppered with photographs. For, this is not fiction, but a cookery book.

As I glance through its pages at random, I stop at one headed ‘Breakfast in Japan’. Here’s the first paragraph:

“Kyoto wakes late, which at least gives me time to write. A perfect morning. Grey clouds. Mist hangs low over the hills like woodsmoke. Soft raindrops. An old woman rides her bike, wobbling, a transparent umbrella in her right hand. Breakfast is miso soup in a deep, black, lacquer bowl, and grilled silver mackerel. A plate of pickles, vivid purple cabbage, white radishes, shredded daikon is salty, sour and crisp.” 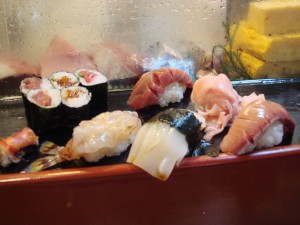 Which is why Nigel Slater is my favourite food writer. You will find recipes in his books. Good ones, creative and useful ones. But he’ll also take you through the whole sensual experience of growing, preparing, cooking and sharing a meal.

In a few words he’s taken me to the other side of the world and offered me a rather strange, but enticing breakfast, and I’m hooked to a cookery book. Maybe it’s because I’ve been to Japan and had fish for breakfast – raw fish in fact in the form of sushi and sashimi just outside Tokyo’s famous Tsukiji fishmarket. But good writing can transport you to new places and give you a sense of sights, sounds and cultures you may never actually experience.

So what does it matter that a cookery book is beautifully written? Surely it’s all about the recipes and the method? The proof’s in the pudding, so to speak.

Well I think it does matter. Because it shows me that Nigel Slater really cares about his work and that he wants to share, not just the end result, but the whole experience. By opening up his memories and thoughts he shares something of himself, as he passes on the pleasures of tastes, flavours and ingredients. If he writes so beautifully, you just know that what he cooks will be served up with as much love and care. To me, Nigel Slater is just as much a writer as he is a cook. And probably the person I’d most like to invite me round for dinner.

Dipping into the third volume of his Kitchen Diaries at that particular page has also brought back memories of my own wonderful time in Japan. The blog posts I wrote then are no longer online, but I still have my notebooks, photographs and poems inspired by my trips there. Maybe it’s time to reflect and republish. Would you like to read more about travelling and eating in Tokyo, Kyoto, Nara and Takayama?

By Michelle on in creative, travel, writing

Today marks the 70th anniversary of the first atomic bomb dropped on the Japanese city of Hiroshima.

Hiroshima. A place name that can stop you dead. As dead as the watch whose hands forever point to 8:15 – the precise moment when the atomic bomb shattered thousands of lives and changed history. 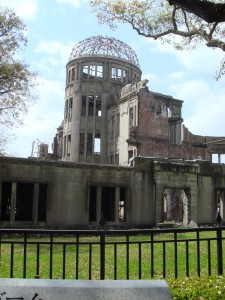 I first visited Japan in the spring of 2007. On the train to Hiroshima, a young man smiled and approached with his hand held out. Nestled in his palm was an origami crane and over the course of our journey, he showed us how to make one.

Taking a pad of patterned paper from his back pack, he began to fold it into shape, slowly, deliberately, taking great care of the creases. He introduced himself as Tsetsuo and thanked us for allowing him to practice his English.

When we got off the train, he walked us over to a tram stop and made sure we reached our destination.

The A-Bomb dome, the building that marks the epicentre of the bomb blast remains a ruined shell. Damaged, but still standing. A marker that held its ground as everything else around it was atomised into dust. Its distinctive shape casts a shadow on the skyline.

It stands at the entrance to the Peace Park, gardens, memorial and the Peace Museum. The museum tells the history of the city and its people, describing the worldwide events that lead to the bomb through a series of panels depicting letters, documents and photographs from world leaders at the time.

The initial blast killed 700,000 people, but in the following weeks and years many more would die from the effects of radiation, from being crushed in damaged buildings, trapped by fire, or simply desperately, desperately thirsty, with only black irradiated water to drink.

A model shows the city before and after the blast. Figures show the desperate human suffering. Eyewitness statements speak of a blinding white flash and then searing pain like hot needles as the shock wave ripped through buildings and bodies. 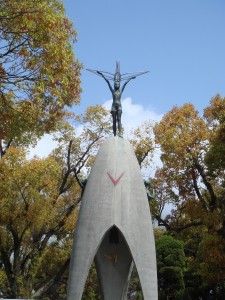 There were only five photographs taken in Hiroshima on 6 August 1945. They were taken by newspaper photographer Yoshito Matsushige, who was a couple of miles away from the centre of the blast. He later wrote: “I fought with myself for 30 minutes before I could take the first picture. After taking the first, I grew strangely calm and wanted to get closer. I took about ten steps forwards and tried to snap another, but the scenes I saw were so gruesome, my viewfinder clouded with tears.”

That phrase, “My viewfinder clouded with tears” has stuck with me. More powerful than any photograph.

The final section of the museum displays objects recovered from the debris. Beside them sit museum cards with details of who they belonged to, where they were at the time of the blast and what they were doing on that day.

A twisted metal lunch box, a tattered uniform, a child’s tricycle. I found these objects and their stories almost unbearably moving. They brought the unimaginable destruction of a thriving city back to a human scale.

There’s a special space for the story of Sadako Sasaki, a girl who died from leukaemia, caused by the radiation 10 years after the bomb. She folded thousands of paper cranes in the hope she would get well. The tradition continues with a monument in the park where children hang colourful paper cranes in a message of peace.

It’s not unusual for westerners in Japan to encounter great kindness. I have heard many travellers tell of being given directions, or even taken to where they wanted to go by local people. As a visitor, you are a most honoured guest, in a country which sets great cultural value on respect. 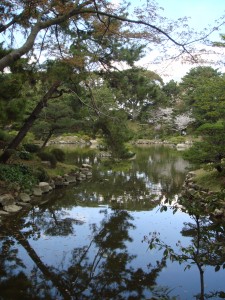 But I think that Tsetsuo, who showed us how to make the paper cranes, was acknowledging more than the usual Japanese hospitality. When we told him we were visiting the Peace Museum, he said his grandfather was one of the many thousands killed in the atom bomb blast.

He knew his city was a hard place to visit. And that was why he took such care to welcome us. To honour our interest in his home town and help us see beyond its sad history.

As we learned in the museum, only a few days after the bomb obliterated the city, the trams began to run again. And despite all the fears that nothing would ever grow again in that irradiated earth, lilies bloomed between the tracks.

Hiroshima now offers a peaceful and friendly face, whilst paying respect to and remembering the past.